In Switzerland the Future of Money is Upon Us 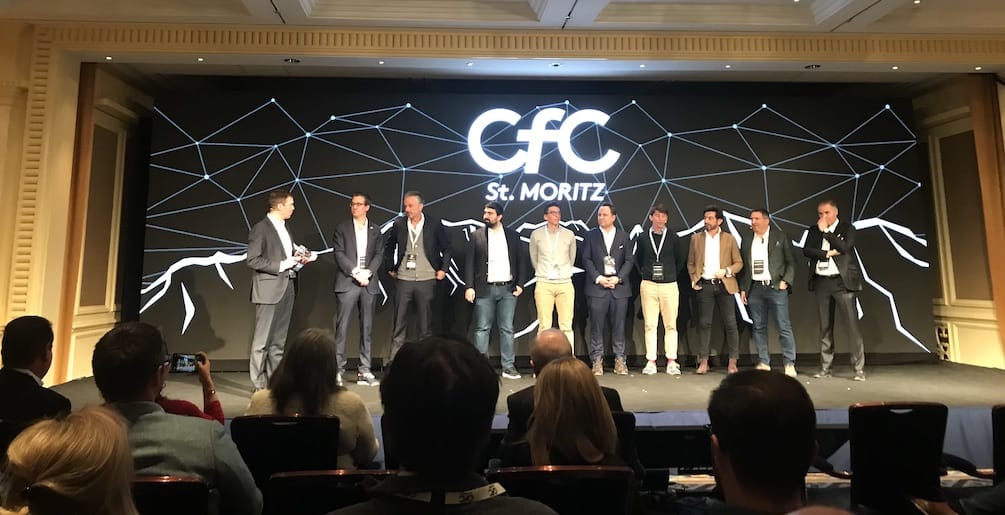 In January I had the opportunity to attend the incredible Crypto Finance Conference in St. Moritz and speak at both the Blockchain Economic Forum and Crypto Valley Summit in Davos during World Economic Forum week about cryptocurrency and the future of money.

On this trip I was lucky enough to speak with influencers, politicians, central bankers, investors, and Fortune 500 executives. One of the main topics that kept coming up was cryptocurrencies, the digitization of money, and how governments, nations, and businesses adjust to this new borderless "Internet of Value" that is emerging as a result of these new digital currencies that offer better transparency, security and programmability. 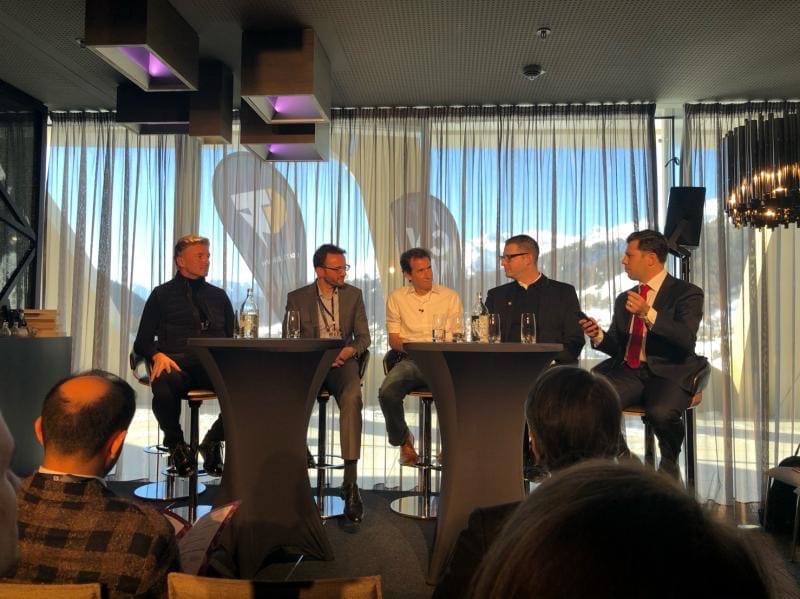 Given how frequent these discussions happened, alongside corporate sustainability, global warming, artificial intelligence and data privacy, it became abundantly clear that, with Libra thrusting the potential of mainstream cryptocurrencies into the limelight, the rich and powerful around the world are taking cryptocurrencies much more seriously. So much so that over the course of the 2 weeks I met with 6 different governments that were already working on central bank digital currencies. Some of which were running on blockchain based networks and in fairly late stages. 👀

What also became abundantly clear is just how fast some jurisdictions are moving, particularly Switzerland, Bermuda, and various Asian and African countries, compared to their North American counterparts. I was particularly impressed with the regulatory framework being laid down in Switzerland and Bermuda. They are both quite robust and incredibly progressive. In particular, Switzerland's new crypto banking license enables businesses to be official "crypto banks" and hold crypto on their balance sheet. With moves like that it is clearly the globally leading jurisdiction today. As a result, innovation and business with respect to cryptocurrencies and tokenized assets is flourishing there.

As a Canadian, I was quite surprised at just how many Canadian ex-pats I had met in Switzerland that were working in the "Swiss Crypto Valley". From lawyers, to developers, to entrepreneurs it seemed that some of the brightest people from all walks of life had been attracted to Switzerland due to its great standard of living, stable economy, and regulatory clarity. 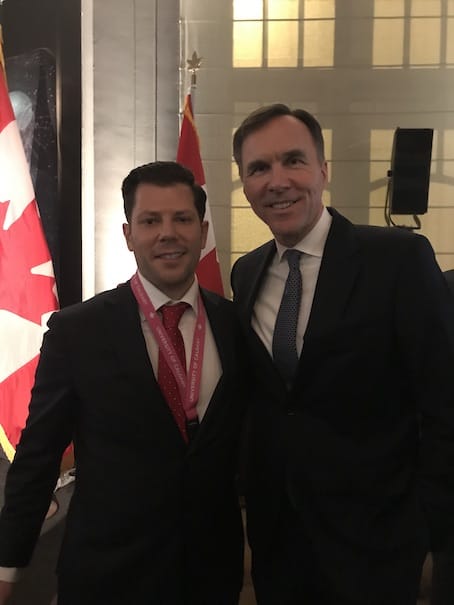 In Davos, I had the opportunity to meet our minister of Business Development & Export Honourable Mary Ng, our Innovation minister Honourable Navdeep Bains, and our Finance minister Honourable Bill Morneau at the Canadian consulate event. The fact that Canadians have built world leading technology but are being forced to move concerns me, and is something I discussed with all three ministers. As a proud Canadian and the CEO of Bidali, an innovative Canadian business in the virtual asset space, it was great to connect with so many other Canadians in Switzerland. However, it also saddened me to think that because of the lack of regulatory clarity here at home, world leading Canadian tech is being exported to other jurisdictions like Switzerland, and as a result Canadians are not able to reap the benefits because jobs are being created over seas.

If I had conviction about the future of money, it was only hardened after my trip to Switzerland. I believe we are on the precipice of the emergence of the "Internet of Value". What the Internet did for the proliferation of data and communication, we will see similar happen to the transferring of value (ie. money). With the Internet we have seen a massive increase in the speed and frequency of communication and data sharing, while at the same time a dramatic reduction in cost. This has resulted in entirely new business models like Uber to emerge in less than a decade.

Just like the Internet, these new monetary mediums are borderless, unstoppable, and benefit from network effects. If you look at countries that were late to adopt the Internet, those economies have drastically lagged their counterparts that adopted sooner, and it wasn't until they joined this global communication layer, that the economies in these lagging countries started to pick up. I believe we will see the same thing happen with money itself, and the countries that delay adoption will be far worse off than the ones that were late to adopt the Internet. Based on this thesis, and what I've seen happening around the world recently, in my opinion, it is in every country's best interest to work with and provide safe haven for this technology, than it is to try and fight it. Otherwise, you run the risk of being left behind.

Since I've come home to Canada I've been working hard to raise awareness about this with regulators, politicians, and other people operating in the virtual asset space in the hopes of creating a regulatory friendly environment here in Canada that nurtures these breakthrough technologies and encourages Canadian innovation, while also protecting Canadian consumers. We really have no choice but to take this line of thinking.

I'll have more updates on that front in the coming weeks. For now I'll leave you with some key takeaways I had from Davos:

Our thesis is that "Stable cryptocurrency is the future of money". At Bidali, we have built the payments infrastructure to make these new, better currencies actually usable. I'm excited for the next decade. Already early on, the future for crypto is looking bright! 🌟

If you are looking for gift cards to buy and ways to save you can use our e-commerce store or our mobile app to quickly buy gift cards and phone top ups at over 2,000 top brands around the world!

We have over a dozens of partners that have already integrated our Commerce SDK to enable their users to spend directly from their platform. If you would like to partner with us contact sales.

Buy gift cards from thousands of top brands around the globe.

Stay up to date and subscribe to our not-too-frequent newsletter.

© Bidali Inc. 2021. Website Version: v3.0.6
†Bidali Cash is a closed-loop, prepaid, stored-value instrument, similar to a digital e-gift card. Bidali Cash is issued solely by Bidali and represents pre-purchased credit at Bidali that is redeemable for goods and services offered on the Bidali Platform. Bidali Cash is denominated in official government issued currency (such as CAD or USD). Bidali Cash has no cash value, and is not redeemable for cash. Bidali Cash is issued as a cryptographically secured rewards token on a distributed ledger in order to improve fraud, loss, and theft prevention. Your Bidali Account Balance is not a deposit account which means that your Bidali Cash account balance will not be protected by the Canadian Deposit Insurance Corporation ("CDIC") or Federal Deposit Insurance Corporation ("FDIC") in the United States. By using the Bidali Services you acknowledge that the purchase of Bidali Cash is a commercial transaction whereby you are purchasing non-refundable stored value credit, akin to a gift card or voucher, for use on the Bidali platform. As such, your purchase of Bidali Cash should not be misconstrued for a bank deposit, loan, or purchase of a derivative or security. For more details please review our Terms of Use.
The merchant as well as its owners and affiliates ("Brand"), for whom gift cards, mobile airtime, and other products and services are available within the Bidali Services, are not sponsors of Bidali, the Bidali Services, or otherwise affiliated with Bidali other than through a reseller or affiliate marketing relationship. The logos and other identifying marks attached are trademarks of and owned by each represented merchant. For complete terms and conditions, please read the merchant's own gift card terms and conditions. Gift card trademarks and copyrights belong solely to the merchant.
Bidali Inc. is a registered Money Services Business (MSB) with FINTRAC with registration #: M18575331